Many Black Americans grew up learning about the 1921 Tulsa Race Massacre that decimated the prosperous Black neighborhood known as Greenwood, but recent events have sparked interest from those who were unaware of “Black Wall Street.”

The Greenwood Cultural Center is now getting telephone calls from as far as Brazil, Dr. Sherri Tapp, president of the board of directors, told BTR. The goal of the nonprofit museum is to preserve and educate the public about the history of the neighborhood of Black-owned hotels, storefronts, Black doctors and lawyers and more.

“I’m sad that we’re in this predicament but elated with the support,” Tapp said.

“More and more people had TVs and were watching,” said Tapp, professor of graduate education at Oral Roberts University. “When they witnessed Bull Connor’s activities and all those people who were protesting peacefully, it really gave the world a picture of the United States,” Tapp added.

Connor was the Birmingham, Ala., commissioner of public safety who opposed civil rights.

Tapp believes that the country is experiencing a transformational learning experience.

“People are becoming not just aware but transformed,” she said. 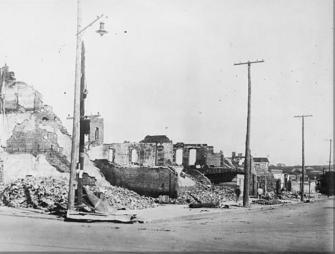 For two days starting on June 1, 1921, an angry white mob burned buildings and murdered more than 200 Black residents after a white teen alleged she’d been assaulted by a Black teen. A 36-block area was destroyed.

The new interest in the incident appears to have stemmed from President Trump’s well-publicized rally in Tulsa on June 20th, just about three weeks after the 99th anniversary of the massacre. Also contributing: the country’s heightened awareness of race in the wake of the May 25th killing of George Floyd, an unarmed Black man, by Minneapolis police. Even before this, “Watchmen,” the 2019 HBO series influenced by the massacre, roused new interest, Tapp said.