Note FROM THE EDITOR

producing good work about all communities could help bridge a divide, not just in New York but nationwide and globally.

Special thanks to Pauline Copes Johnson of Auburn, N.Y., Tubman’s great-great grandniece (that is her in the photo with me). I first wrote about her several years ago and now visit her when I can. Her determination to tell and keep telling the story of her “Aunt Harriet” has inspired me.

If you have a story tip or want to discuss the site please reach out at Melanie@BeyondtheRailroad.com.

I am a veteran journalist who decided to push forward with creating BTR after I was part of a mass layoff in 2017 from USA Today. The dream of this organization dates back to my teen years, when I discovered that Black people live outside of New York City, where I grew up. As I fed my curiosity about communities upstate, I learned that Underground Railroad conductor Harriet Tubman spent the last half of her life in Auburn, N.Y., outside of Syracuse, that abolitionist Frederick Douglass published his North Star newspaper out of Rochester, where he is buried, and that Black people exist everywhere. It struck me that there are many newsworthy situations and people going without coverage, and that 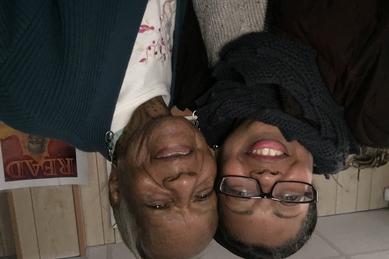 
Thanks for checking out Beyond the Railroad. The goal is to provide you with in-depth news and enterprise pieces that offer untold stories of people of color, beyond the Underground Railroad, beyond the Great Migration, beyond what already is out there.

Work that you find here will offer context and history.