By Sheena O’Connor for Beyond the Railroad

On a Sunday afternoon in May, the sun is bright and there is a breeze. Summer is coming but it’s been sidetracked by COVID 19. The livestream of today’s church service has just ended and I am anxious about what lies ahead. I plan to march. More specifically, I intend to raise my voice against police brutality against Black people. I dress in all black and an orange pin that says, “Racism hurts everyone.” I put a black wrap on my head, adding about three inches to my height. I look the part of the quintessential activist, but there is no time to make a sign. I do not want to be late.

I have marched before, but this time feels different, as if all of these protests might amount to a change in the way police police; changes in laws that discriminate against Black people. Maybe this feeling is partly due to the surgical mask on my face. We are, after all, putting ourselves at risk as we demonstrate during a pandemic. I feel compelled to take a stand. I must be in that number. As I drive to the meetup site, I think about the ancestors. Would they be proud of us for protesting or would they lament because we still have to protest?

Facebook alerts me to the location of the group I am joining. “They are in front of the Foot Locker,” I shout to a Black couple also dressed in black. They nod at me as they head to “The Ave,” Jamaica Avenue in Queens. All over the nation and even the world, people are marching. I wonder what the streets would say if they could speak. They have seen so many Black lives taken unjustly at the

hands of police, many of them before we could capture them on our phones. I turn the corner and I see thick crowds of people on the move. It seems as if the streets could buckle under the weight --  of pain, hurt, oppression and racism.

It seems as if the majority can finally “see” what Black people have been grieving for centuries. We could have avoided so much if the streets could talk. I fall in line. I see George Floyd’s name on protest signs. I will never forget the video of his murder and his cries for breath that fell upon deaf ears of those sworn to protect. I become despondent. Those four police officers had almost nine minutes to show a modicum of humanity and save George Floyd’s life, and they did nothing. The despondency evolves into a quiet rage. I resist it. Now is not the time. Anger is not the way.

The police are here. My mom begged me not to come. Between chants of “No Justice, No Peace,” I try to count the number of officers but I keep losing track. I form an escape route in my head in case things go awry. Visions of rubber bullets and tear gas flash through my mind. I do not want to be arrested.

The police presence is undeniable. The march is peaceful, as organizers promised, except for a random man cursing at an officer.  Organizers said it would be peaceful and it is, but this random man is cursing at an officer. I also see the black, white and blue flag that represents “Blue Lives Matter” and police who are against the protesters. I move. My mom would be pissed if something happened to me. #Jamaicans  They're giving out masks and I cannot believe we still have to wear them. What if something actually pops off? I did not bring milk with me in case there is tear gas. I forgot to charge my phone. I did not even write the number of one of those free lawyers on my arm. I am not cut out for activism, but I have to be here. I wonder who will police the police? Then a moment happens. Some of the officers take a knee with the protesters. Most cheer but some are skeptical. I’m not sure Colin Kaepernick would be happy either. We march on.

I have not walked down The Ave in years. There is a new Burlington Coat Factory and Chipotle. It is hot in all black. Where did they find all of these police officers anyway? COVID-19 really shut everything down. There are boards on most stores. Do they think we are going to steal? Not sure that there is anything to steal. Some of these stores may not come back. That would be a shame. I wonder how much further we will walk. Construction has stopped on many of the new high-rise apartment buildings. When they open, I am sure the rent will be sky-high - but why? This area is still considered the hood - it’s just close to the train. Is this how gentrification starts? Like a luxury apartment here, then a Starbucks here, then an artisanal candle shop and finally a bike lane? Should I move to Jersey?

“Stay focused,” I tell myself. “You are not here to fight that battle today.” Still, it is one battle that is part of a larger war against Black people. The murders of George Floyd, Breonna Taylor “#sayhername” and countless others deserve this outpouring, but it is easy to despair about how Black people are treated. Hashtags emerge instantly, and yet real change is slow. I cannot believe we still have to do this. It is 2020  --- 401 years after the first slave was ripped from their homeland and brought to the United States. At first I was hopeful but now I do not know.  What will it really take for things to get better? Waiting was not efficacious.

The protest ends and people disperse. I walk back to my car. I really should have made a sign, I think. Maybe I will make a sign for the next one, if there is a next one.

Sheena O’Connor is a special education teacher at a charter school in Brooklyn, N.Y. She lives in Queens. 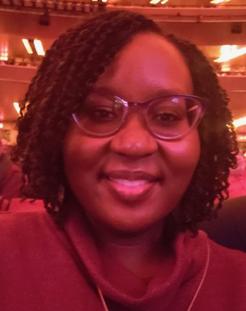