“They’re learning about their cultural history, but more than that, they see Eagle as a brotherhood for them,” Banks said. “It’s a place that deeply cares about them and they know it. We struggle as well. We have young men that are more than a handful and yet we say this is what we asked for. We want to make sure we get everybody to their own finish line.”

Banks added, “If you believe in somebody, they can become all they're supposed to be.”

In this time of heightened awareness of how Black and Brown boys and men are mistreated, misjudged and misrepresented globally - spurred on by the May 25th death of George Floyd - the message of the academy and the documentary about it might seem timely to many.

Brooklyn, N.Y. Borough President Eric Adams told BTR he supports the academy because it gives boys the support they need. Adams helped the academy come about. He is a former New York City police officer and a father who has seen the effects of support and good education, and the effects of the opposite.

“The model of fraternity, how they believe they are part of a group works - Black boys learn differently,” Adams said. “We are rewiring the brains of Black and Brown boys. We live in a country where we say, ‘Black and Brown boys they are nothing.’ And so you come with this organization and every day they are telling these boys, ‘You are something.’ “

Campbell feels the message is important. The executive producer now lives in Upstate New York, but when he lived in Brooklyn, N.Y., he said he had to stop watching the news because all it contained was bad news and violent news involving Black males. He knew there was a better narrative out there, he said.

The Eagle Academy concept was partly motivated by an oft-cited study initially conducted by inmates, and repeated by two correctional associations that showed that 75 percent of the inmates in New York State-run prisons came from seven neighborhoods in New York City. Incarceration is big business in struggling upstate communities in New York, where there are more than 50 correctional facilities outside of the five boroughs. Critics of the nation’s criminal justice system believe the victimization of Black males, 53 percent of prison and jail inmates in New York, is helping to fund the parched upstate economy, where manufacturing is crippled.

Banks and his supporters thought to themselves why not attack the problem head on and open schools in those seven troubled neighborhoods. With the support of former New York City Mayor Michael Bloomberg, the first school opened in 2004 in the Bronx with 100 boys entering ninth grade.

“We didn’t graduate everybody,” Banks said. “They came in at a 6th-grade reading level. They came in with emotional baggage.”

Banks thought if he could get the boys a little sooner the academy could have more of an effect. Eagle Academies opened in Brooklyn, southeast Queens, Newark, Central Harlem, Staten Island and Newark. Those schools brought boys in at the 6th grade.

The model worked. Graduate Christopher Davis told BTR that the program was effective for him because he formed close relationships with students, teachers and staff over the six days perthat students had to report to school. Davis earned a degree from Jarvis Christian College and now is program director at the Kips Bay Boys and Girls Club in New York.

“What I got from Eagle Academy was the social-emotional component,” Davis said. “It felt amazing.”

The head of a Black filmmakers’ organization said he is glad that the Eagle Academy story is being told through film, a powerful medium.

“A documentary is one of the most powerful media in the world, especially documentaries from an African-American perspective,” Rafee Kamaal, cochair of the NYC-based Black Documentary Collective, told BTR. “We often see entertainment but we rarely see infotainment so I’m glad a documentary is being made about an organization that I hear is doing exemplary work,” he said.

By Melanie Eversley
Beyond the Railroad

John Campbell was in New York in 2017 working on a documentary about education when someone told him he should talk to the folks at Eagle Academy schools.

Campbell saw the success that the fairly new set of all-male public schools was having in breaking the pipeline of Black boys to prison, and he put aside the project in front of him. Instead, Campbell began working on a documentary about Eagle Academy, a chain of all-boys’ public schools so successful that educators around the world are borrowing the model. The result of Campbell’s work is The Infamous Future, a 40-minute film now collecting a parade of awards on the festival circuit.

“The very first thing David said to me was, ‘I have the greatest story that has never been told,’ “ Campbell recounted. “That’s the very first thing he said. That literally took my breath away. In making films, those are the kinds of words that inspire you and make you intrigued to find out more.”

Campbell learned about the academy, its system of forging camaraderie between students, teachers and staff and its strong mentor system and instantly decided to pivot.

“I said to my director, ‘We’re going to have to scrap the last six months of filming because we’re going to tell a positive story about education in America,’ “ Campbell said.

It took two men who came from supportive upbringings to create an institution and a film touting it that pushes to create opportunities for all Black Boys.

Campbell has had multiple successful careers in the arts and in the corporate world. The minister’s son was born in the Paddington section of West London and grew up studying cello, piano and voice. At first, his focus was classical music but he branched out to pop, gospel and rhythm and blues, he said. He toured with Elton John and the late George Michael and was offered a deal with LaFace Records but wound up not signing the paperwork. He later crossed over into corporate America, rising to chief of staff of global digital strategy for Citigroup. While there, he networked with the arts community and befriended filmmaker Qasim Basir, who invited him to work as coproducer on two of his films.

The Infamous Future relays the story of Eagle Academy, a set of all-boys public schools around New York City that infuses its students, mostly Black and Brown, with lots of self esteem and positive Black history. Eagle Academy also requires uniforms, and expects discipline and hard work from its students.

So far, statistics show the plan is working. Eagle’s graduation rate is 87 percent, compared with the national rate of 59 percent for Black and Brown boys, according to the academy. Ninety-eight percent of its graduates are accepted into college, the academy reports.

David Banks, New York City native and career education administrator, is the engine behind the academy.

He believes all people have a responsibility on this earth to leave a mark.

“I’ve been involved in a few other films; this is the first project where I feel a full sense of purpose where I’m being of service to Eagle Academy, to New York, to Black and Brown boys,” Campbell said. “I really feel that this was my offering. We have to think about what we are offering to society each day.”

Campbell added, “I felt it was important to give an important message on Black education, particularly around Black and Brown boys.”

Banks grew up with two strong parents, his father a New York City police officer. He and his two brothers “saw what it means to be a good man, good husband, good father, good caretaker  - even today he’s my best friend,” Banks said of his father.

“If every Black man in America had my dad, we would have none of these problems,” Banks said.

His dream is that the Eagle Academy model is replicated in as many places as possible. Banks said he gets requests from all over the world to open another Eagle Academy. He is happy that visitors from around the country and world are visiting to learn how to create similar institutions.

He’s had visitors and inquiries from educators and government representatives from South Africa, Bermuda, Detroit, Chicago and help set up a school in Los Angeles, he said. He also hosts a summer training institute for educators interested in bringing the model home to their communities.

“Our focus now is to help people do this themselves,” Banks said.

“This is a space that I’ve dedicated my life to so anytime we have the opportunity to continue to build the brand and expand the message and let more and more people know about recognizing and investing in solutions of young men of color, that’s what we’re excited about.”

© Copyright 2020. Beyond the Railroad. All Rights Reserved. 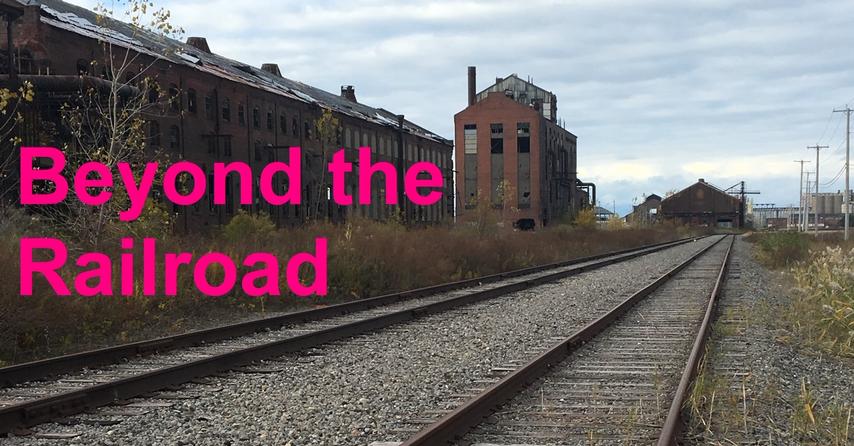 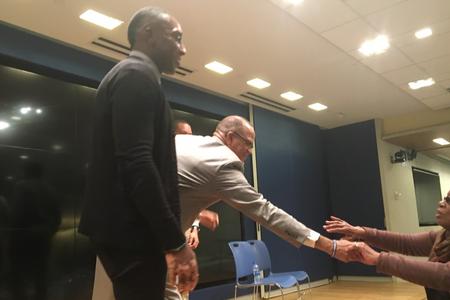 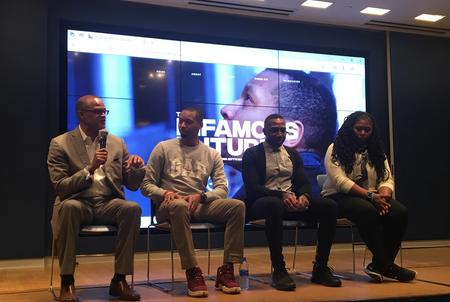 John Campbell, left, executive producer of The Infamous Future, and David Banks, right, president and CEO of The Eagle Academy Foundation, meet audience members at a screening of the film in New York City.

David Banks, left, president and CEO of The Eagle Academy Foundation, speaks at a screening of The Infamous Future in New York City. Next to him is Eagle graduate Christopher Davis.