John Lewis, the last of the 'Big Six'  organizers of the March on Washington,  has died at 80

The last surviving organizer of the 1963 March on Washington, a civil rights icon who came to be known as the “conscience of the Congress,” has died. U.S. Rep. John Lewis, D-Georgia, was 80-years-old. Sadness poured in from around the globe at the announcement of his passing Friday night.

"Today, America mourns the loss of one of the greatest heroes of American history," House Speaker Nancy Pelosi, D-Calif., who'd worked with Lewis on Capitol Hill for many years, said in a statement. "John Lewis was a titan of the civil rights movement whose goodness, faith and bravery transformed our nation -- from the determination with which he met discrimination at lunch counters and on Freedom Rides, to the courage he showed as a young man facing down violence and death on the Edmund Pettus Bridge (in Selma, Ala.) to

the moral leadership he brought to the Congress for more than 30 years."

Pelosi often accompanied Lewis on his pilgrimages through the South and to Selma, where he was beaten and had his skull broken as he marched for voting rights.

by his passing. May his memory be an inspiration that moves us all to, in the face of injustice, make 'good trouble, necessary trouble.' "

"The world has lost a legend; the civil rights movement has lost an icon, the City of Atlanta has lost one of its most fearless leaders, and the Congressional Black Caucus has lost our longest serving member," the Congressional Black Caucus said in a statement Friday. "A fighter for justice until the end, Mr. Lewis recently visited Black Lives Matter Plaza in Washington, D.C. His mere presence encouraged a new generation of activist to 'speak up and get out' and get into 'good trouble' to continue bending the arc toward justice and freedom."

"Today, the world has lost a giant," said Rev. Raphael Warnock of Ebenezer Baptist Church in Atlanta - the church once led by the late Martin Luther King.

"I lost a mentor, a church member and a friend," Warnock said in a statement. "In his youth, John Lewis wrestled with a call to ministry. But instead of preaching sermons, he became a sermon for all the world to see. He was a walking, living sermon about love, truth telling and justice making on the earth."

In late December of 2019, Lewis announced he was battling stage four pancreatic cancer, a development that prompted expressions of support from his fans, friends, and colleagues worldwide.

His impact has transversed its way throughout history. There has not been one modern-day civil rights development in which Lewis did not play a role, from the opening of the landmark National Museum of African American History and Culture in Washington D.C. to demanding comprehensive gun control to the election of Barack Obama, the country’s first Black president. His work leading the Selma to Montgomery march in 1965 and as a Freedom Rider through the South helped to dismantle discrimination in voting and travel.

But despite Lewis’ accomplishments, people in a parade of circles came to know him as the approachable Democratic statesman who practiced Southern hospitality and worked toward diplomacy with his Republican colleagues.

Lewis’ parents were sharecroppers and he grew up with nine brothers and sisters on the family farm outside of Troy, Ala. He often told audiences that he honed his speaking skills by preaching to the family’s chickens. He attended segregated schools in Pike County, Ala., and once told reporters that it hurt him to see Black people living that way. He tuned in to the radio to follow the Montgomery Bus Boycott and the work of the late Dr. Martin Luther King Jr. He was so inspired that he wrote to King, marking the beginning of an impactful mentor relationship.

While Lewis was an undergrad at Fisk University, he organized sit-ins at segregated lunch counters in the surrounding Nashville area. He later attended the American Baptist Theological Seminary, also in Nashville, where he studied homiletics, the art of writing sermons and preaching.

In 1961, Lewis volunteered to take part in the Freedom Rides, a campaign in which he and other Black activists rode interstate buses to the South to dismantle segregation in travel. As documented in the David Halberstam book The Children, Lewis, late former Washington Mayor Marion Barry, civil rights pioneer Diane Nash and many others withstood mob beatings and arrests to change bus travel for all Blacks.

During these days, Lewis and his fellow Black demonstrators would show up to protests in suits to show the world how Black people did things. He said he often brought a brown paper bag with fruit in case he got arrested and jailed.

Lewis helped create the Student Nonviolent Coordinating Committee (SNCC) and led the organization from 1963 to 1966. His work drew the attention of King, who dubbed Lewis “The boy from Troy.” As a young man in his early 20s, he came to be recognized as one of the “Big Six” civil rights leaders who organized the 1963 March on Washington. As the youngest of the crew, it's said that the elder civil rights leaders pushed Lewis to tone down the fiery speech he had planned for the crowd at Washington’s National Mall.

Lewis focused his work on voting rights as reports surfaced from the South that Black people were being made to guess the number of jelly beans in a jar and perform other impractical feats in order to register to vote. During Mississippi Freedom Summer, he organized voter registration drives.

As the movement focused on registration discrimination in Selma, Ala., and the surrounding Dallas County, Lewis and fellow activist Hosea Williams launched a march in 1965 to the state capital of Montgomery to draw attention to the voting rights movement. They did not get far. As the crowd crossed the Edmund Pettus Bridge in downtown Selma, an army of state troopers attacked them with batons, whips and tear gas.

The violence, later dubbed “Bloody Sunday,” would mark a moment in Lewis’ life for which he would become most known.

Selma became a seminal moment in the civil rights movement and roused the emotions of the country. The troubles prompted Dr. King to step in and finish what Lewis started, and lead marchers to the steps of the Alabama state capitol. The work of Lewis and the others helped bring about the passing of the Voting Rights Act of 1965.

After working with the Field Foundation and the Voter Education Project in 1977, Lewis was appointed by former President Jimmy Carter to direct ACTION, the federal volunteer agency. Four years later, Lewis successfully ran for a seat on the Atlanta City Council, and after serving five years, was elected to the U.S. Congress in 1986. He held that seat until his death after also risen to Dean of the Georgia congressional delegation. Lewis was also a longtime member of the House leadership, serving as senior chief deputy whip for House Democrats and was a proud member of the House Ways and Means Committee.

Lewis became a sought-out speaker who was awarded the Medal of Freedom by President Obama, the NAACP Spingarn Medal, the John F. Kennedy Profile in Courage Award, the Martin Luther King Jr. Memorial Award and more than 50 honorary degrees from colleges and universities including Morehouse, Harvard, Howard, and Brown. In talks, he often urged his audiences to “get in the way” of society’s conventions in order to make a change, and to create “good trouble.” He preached about his dream of the "beloved community," a utopian ideal in which all people would respect and love one another.

He spent time during the summers visiting his late mother, Willie Mae Carter, and traveling through the South to visit different artists and purchase their work.

The congressman was the engine behind the National Museum of African American History and Culture, a Smithsonian site on the National Mall in Washington. The institution had always been a dream of his, he told reporters. For years, he stayed in conversation with historians around the country, and Congressional Republicans in an effort to push through legislation approving funds for the museum. In doing so, he also gained the support of people like Oprah Winfrey, a descendant of abolitionist Frederick Douglass, actress Cicely Tyson and more to his cause, ultimately leading to the opening of the museum in 2016 — a dream come true.

Working with the nonprofit Faith and Politics Institute in Washington, Lewis led Congress members, officials, celebrities and members of the public through annual pilgrimages to sites of key civil rights battles in the South, culminating with the crossing of the Edmund Pettus Bridge in Selma. In 2019, over 50 members of Congress visited Alabama for the event which has included people from former President Obama and House Speaker Nancy Pelosi to the Rev. Jesse Jackson, Rep. Maxine Waters, actor Terrence Howard and comedian Chris Tucker.

The congressman is predeceased in death by his wife, Lillian, and survived by a son, John Miles.

©Copyright Beyond the Railroad, 2020. All Rights Reserved.

John Lewis in 2010 in Selma, Ala., after the annual "Bloody Sunday' commemoration at the Edmund Pettus Bridge. Photo: Beyond the Railroad.

John Lewis at the Edmund Pettus Bridge in Selma, Ala., in 1965. Photo: Magnolia Films. 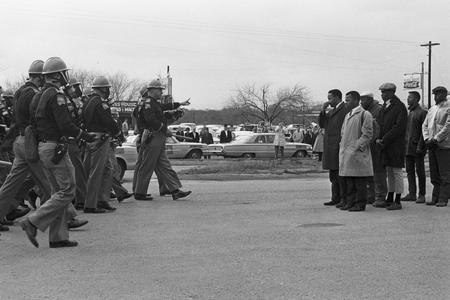 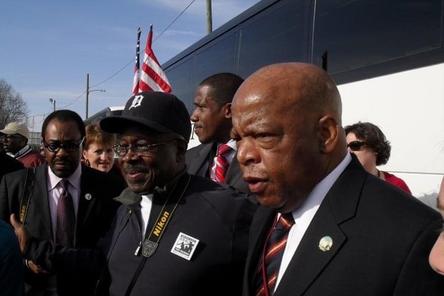